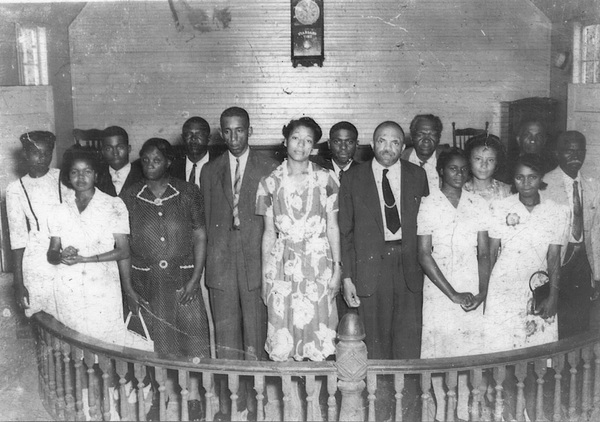 The Building of A Church

It was 1870, five short years after the abolishment of slavery as a way of life in the South.  People of this small community, now known as Steele Hill, gathered in the homes to hold prayer meetings.  The gatherings grew and it was before it was recognized that a larger place was needed.  Six men of the group were electedTrustees and their mission was to plan and procure a place for worship.  The trustees decided that it was time to try purchase land and to build a church.
It was probably 1877 when the Trustees approached the major white landowner, A.W. Heath regarding the purchase of a small piece of property. A.W. Heath agreed to sell a small parcel of land to the Trustees for sixty ($60.00) dollars.  On February 10, 1880, a Conveyance of Real Estate was drawn up for a small parcel of land, just over four (4) acres bound on the northeast side by Steele Creek Road and the  northwest by property of A.P Nivens. The real estate transaction was entered into between A.W. Heath and the Trustees - A.B. McKeena, Lewis Vinson, Wesley Heath, Eli Belk, Anderson Heath and Kit Stinson.  James F. Steele, Trial Justice, executed the transaction. This land as specified in the terms of the sale was to be used exclusively "for the building of a church and for educational purposes."
And I say unto thee, "Upon this rock I will build my church"... Matthew 16:18
Steele Hill A.M.E. Zion Church appears to be named based on the location. The parcel of land was on hill that overlooked Steele Creek Road. History records the church had humble beginnings.  Members cut and donated trees from their homesteads for lumber and they diligently placed their offerings in the collection basket.  A brush arbor was the first recorded church dwelling. The first recorded church building was in 1885. A few years later, a school and an arbor was constructed.  The church has been renovated on three occasions - 1950, 1960, and 1975.  A new sanctuary was dedicated in July 1999.  The founding Trustees and members created a legacy and the torch continues to be passed.